Larry King, the longtime CNN host who became an icon through his interviews with countless newsmakers and his sartorial sensibilities, has died.

A statement was posted on his verified Facebook account announcing his passing. His son, Chance, confirmed King’s death Saturday morning.

“With profound sadness, Ora Media announces the death of our co-founder, host and friend Larry King, who passed away this morning at age 87 at Cedars-Sinai Medical Center in Los Angeles,” the statement said.”

For 63 years and across the platforms of radio, television and digital media, Larry’s many thousands of interviews, awards, and global acclaim stand as a testament to his unique and lasting talent as a broadcaster.”The statement did not give a cause of death.

He battled a number of health problems

King had been hospitalized with Covid-19 in late December at Cedars-Sinai, a source close to the family said at the time.He battled a number of health problems over the years, suffering several heart attacks.

In 1987, he underwent quintuple bypass surgery, inspiring him to establish the Larry King Cardiac Foundation to provide assistance to those without insurance.

More recently, King revealed in 2017 that he had been diagnosed with lung cancer and successfully underwent surgery to treat it. He also underwent a procedure in 2019 to address angina.

King also suffered personal loss last year when two of his adult children died within weeks of each other: Andy King, 65, suffered a heart attack and daughter Chaia King, 52, died after being diagnosed with lung cancer.

King is survived by three sons.

He interviewed every president from Ford to Obama 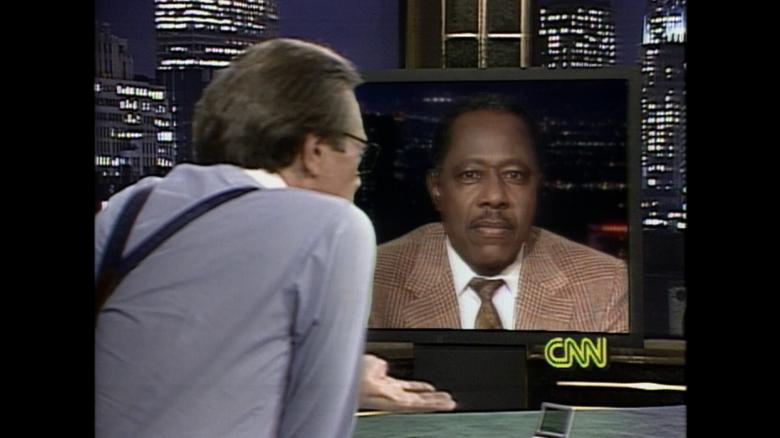 Larry King with MLB Hall of Famer Hank AaronIn an era filled with star newsmen, King was a giant — among the most prominent questioners on television and a host to presidents, movie stars and world class athletes.

With an affable, easygoing demeanor that distinguished him from more intense TV interviewers, King perfected a casual approach to the Q&A format, always leaning forward and listening intently to his guests, rarely interrupting.”

I’ve never learned anything,” King was fond of saying, “while I was talking.”CNN President Jeff Zucker on Saturday acknowledged King’s role in raising the network profile around the world.”We mourn the passing of our colleague Larry King,” he said in a statement.

Larry King Fast Facts“The scrappy young man from Brooklyn had a history-making career spanning radio and television. His curiosity about the world propelled his award-winning career in broadcasting, but it was his generosity of spirit that drew the world to him.

We are so proud of the 25 years he spent with CNN, where his newsmaker interviews truly put the network on the international stage.

From our CNN family to Larry’s, we send our thoughts and prayers, and a promise to carry on his curiosity for the world in our work.

“For that quarter century, King hosted “Larry King Live” on CNN, a span that was highlighted by more than 30,000 interviews, including every sitting president from Gerald Ford to Barack Obama, and thousands of phone calls from viewers.

Wendy Walker, his longtime executive producer on the show, said King treated all of his interview subjects the same — from heads of state to ordinary Americans.

Celebrities and newsmakers are paying tribute to broadcasting legend Larry King“The one thing he loved was being in front of that camera,” she said. “He was a very interesting man but that one hour a day, when those lights came on, he was just perfect. He treated every guest the same.

It didn’t matter if it was a president or somebody just off the street.”King was known for not spending time preparing for interviews, preferring instead to let his natural curiosity guide the conversations, Walker said.

“Probably that was the hardest part of our job — trying to prepare him because he never wanted to be prepared,” she recalled. “He read all day long and watched news, so he was really informed but he really just wanted to hear his guests talk and then come up with his questions.”

The show made King one of the faces of the network, and one of the most famous television journalists in the country.

His column in USA Today, which ran for nearly 20 years until 2001, showcased King’s distinct style in print, inviting readers down a trail of non-sequiturs that served as a window into his mind.

Larry King: An appreciation of his legacy from CNN president Jeff Zucker“The most underutilized player in the NFL this year was Washington’s Desmond Howard…Despite what you think of Lawrence Walsh, we will always have the need for a special prosecutor because a government cannot investigate itself,” King wrote in a 1992 column.

Those musings, combined with his unmistakable appearance — oversized glasses, ever-present suspenders — made King ripe for caricature. In the 1990s, he was portrayed on “Saturday Night Live” by Norm MacDonald, who channeled the USA Today column with a spot-on impersonation.

Jokes aside, King’s influence is evident today in the generation of podcasters who have mimicked — whether deliberate or not — his conversational approach to interviews.

“A good interview — you know more than you do before you start. You should come away with maybe some of your opinions changed,” King told the Los Angeles Times in 2018. “You should certainly come away entertained — an interviewer is also an entertainer.”

He started his media career as a disc jockey 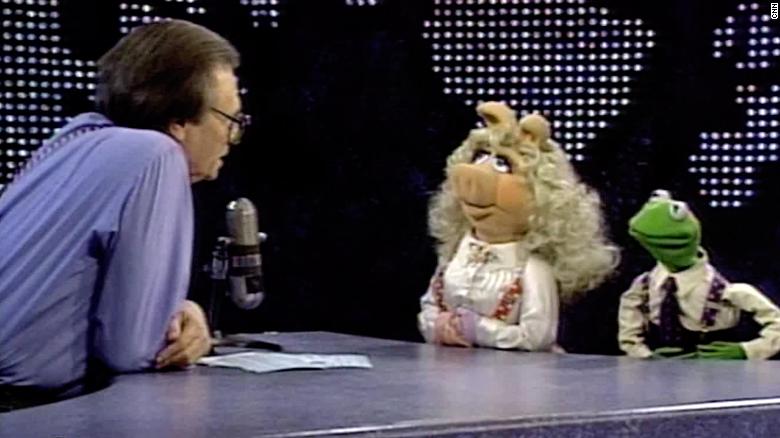 His mother, Jennie (Gitlitz) Zeiger, was from Lithuania, while his father, Edward Zeiger, hailed from Ukraine.

Edward died of a heart attack when King was 10, a memory King said he mostly “blocked out.”Left to raise King and his younger brother Marty alone, Jennie Zeiger was forced to go on welfare to support her children. The death had a profound effect on King, and his mother.

“Prior to his death, I’d been a good student but afterwards, I just stopped being interested,” King told The Guardian in a 2015 interview. “It was a real blow to me.

But eventually I channeled that anger because I wanted to make him and my mother proud.”King said his father had enormous influence on him, instilling in his son a sense of humor and a love of sports.

And no sport drew more of King’s affection than baseball.

Larry King’s son and daughter die within weeks of each otherHe grew up a fan of the Brooklyn Dodgers, and continued to support the team after its move to Los Angeles.

He was a fixture at the team’s home games in Dodger Stadium, often spotted in the high-priced seats behind home plate. In 2004, King wrote a book aptly titled, “Why I Love Baseball.”

“He was a voracious Dodgers fan, baseball fan,” said longtime friend and Dodgers sportscaster Charley Steiner. “And we would fuss and fight about what the Dodgers were doing.

It made him enormously happy.”King’s career in media began in earnest in 1957, when he took a job as a disc jockey at WAHR-AM in Miami.

It was then when he made the decision to drop his surname.”You can’t use Larry Zeiger,” he recalled his boss at the station saying.

“It’s too ethnic. People won’t be able to spell it or remember it. You need a better name.””There was no time to think about whether this was good or bad or what my mother would say.

I was going on the air in five minutes,” King wrote in his 2009 autobiography.

“The Miami Herald was spread out on his desk. Face-up was a full-page ad for King’s Wholesale Liquors. The general manager looked down and said, ‘King! How about Larry King?'”

His CNN show premiered in 1985 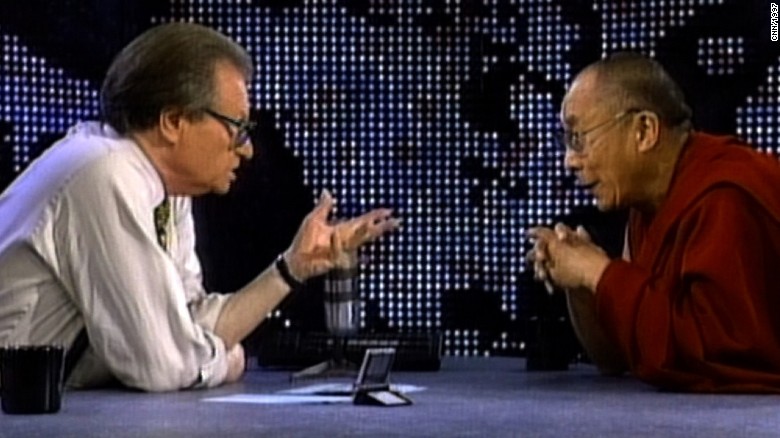 The Dalai Lama discusses Buddism with Larry King.It was around this time that King entered what would become a string of failed marriages.

His union with Frada Miller was annulled, and the dates of his second marriage with Annette Kaye are publicly unavailable.From 1961-63, King was married to Alene Akins, whom he married again from 1967-71; before they re-married, King tied the knot with Mickey Sutphin in 1964 before they divorced in 1966.

He had two more divorces — with Sharon Lepore, with whom he was married from 1976-82, and Julie Alexander, with whom he was married from 1989-92 — before marrying his seventh wife, Shawn Southwick in 1997 at UCLA Medical Center, as he was about to undergo cardiac surgery. King filed for divorce from Southwick in 2019, citing irreconcilable differences.

Larry King is recovering in the hospital after undergoing a heart procedureKing remained in Miami for years, eventually getting hired as a columnist for the Miami Herald in 1965.

In 1971, he was arrested in Miami on charges of grand larceny, which led to his suspension from the station and newspaper where he was employed. Although the charges were dismissed the following year, King was not re-hired, prompting him to decamp Florida and head to Louisiana, where he worked as a freelance journalist.

By 1978, King returned to Miami and to WIOD, the station where he was employed at the time of his arrest. The same year, “The Larry King Show” launched as a syndicated late-night radio show.

It originally aired in 28 cities; within five years, it had spread to 118 cities, serving as the springboard to fame. The show won a Peabody Award in 1982.In 1985, “Larry King Live” premiered on CNN, beginning a long and storied run that included a number of high-profile interviews.

Throughout its more than two decades on air, the show was routinely CNN’s most-watched program, and King was arguably the network’s biggest star.King left CNN in 2011, a move he expected would amount to retirement.

But he kept working until his death, hosting “Larry King Now,” a program that aired on Ora TV, Hulu and RT America. King, it seemed, just never wanted the interview to end.

“I just love what I do,” he said, “I love asking questions, I love doing the interviews.”