As Middle East crude oil exports are a vital part of the tanker market, it’s worth taking a look at the latest market fundamentals.

In a recent weekly report, shipbroker Banchero Costa said that “Kuwait is the fourth largest exporter of crude oil in the Middle East after Saudi, Iraq and the UAE.

Exports have been pretty stable in recent years, and perhaps surprisingly, remain stable this year as well, despite all that’s happening in the world. This has been aided, no doubt, by a strong focus on Asian markets.

As much as 92% of Kuwait’s crude exports are shipped east of Suez. Almost all Kuwaiti exports are loaded at the Mina al Ahmadi terminal.

About 60 percent of volumes are carried in VLCCs. In the first 10 months of 2020, Kuwait exported at least 83.4 mln tonnes of crude oil by sea, according to vessel tracking data from Refinitiv”. 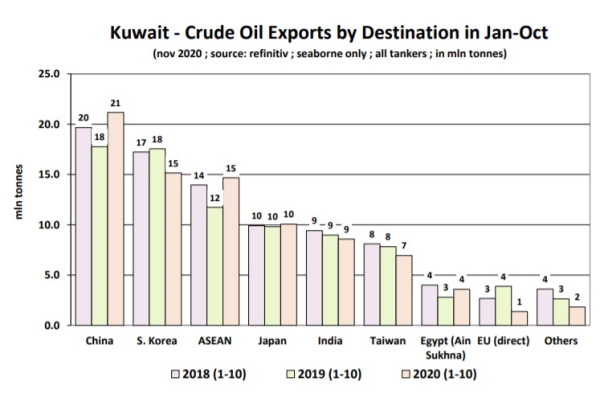 Banchero Costa said that “this represents a net increase of +0.5% y-o-y, compared to the 83.0 mln tonnes exported in the same ten-month period of 2019.

Export volumes this year have been strongly affected by OPEC quota policies.

When OPEC turned open its tabs in the early part of 2020, Kuwait exports remained very high on a seasonal basis, but when OPEC started imposing production cuts, exports were slashed from June onwards.

Therefore, the first quarter of 2020 was very positive, with Kuwait exporting 27.5 mln tonnes of seaborne crude oil, which was a strong +9.8% increase on the same period last year.

However, the second quarter of 2020 already proved to be much more negative, with oil prices in freefall and demand from Europe and Asia evaporating.

In the period April-June 2020, seaborne crude oil exports from Kuwait declined by -3.9% year-onyear to 23.6 mln tonnes.

In June 2020, with OPEC now again implementing production curbs, Kuwait export volumes tumbled to just 6.9 mln tonnes, which was down -13.1% year-on-year, and the lowest monthly figure since 2016. 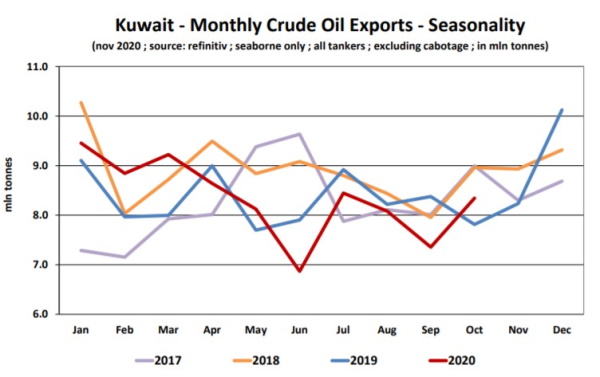 The shipbroker added that “things were equally disappointing in the third quarter. In the Jul-Sep period, Kuwait exported 23.9 mln tonnes of crude oil, which was -6.4% decline from the 25.5 mln tonnes exported in the same quarter last year.

The vast majority of Kuwaiti exports are shipped to East Asia. Of total exports this year from Kuwait, 25.4% or 21.2 mln tonnes were destined for Mainland China.

Volumes to China this year increased by +19.2% y-o-y. A further 6.9 mln tonnes were shipped to Taiwan, representing 8.3% of Kuwaiti crude exports.

Shipments to ASEAN account for 17.6% of Kuwait’s exports. Exports to India are slightly down, by –4.4% y-o-y to 8.6 mln tonnes. Volumes to the USA are down -66.2% y-o-y to just 0.7 mln tonnes”, Banchero Costa concluded
Nikos Roussanoglou, Hellenic Shipping News Worldwide

One shot dead at Kasoa-Nyanyano over chieftaincy installation March 1, 2021

MTN Ghana makes changes to its board March 1, 2021